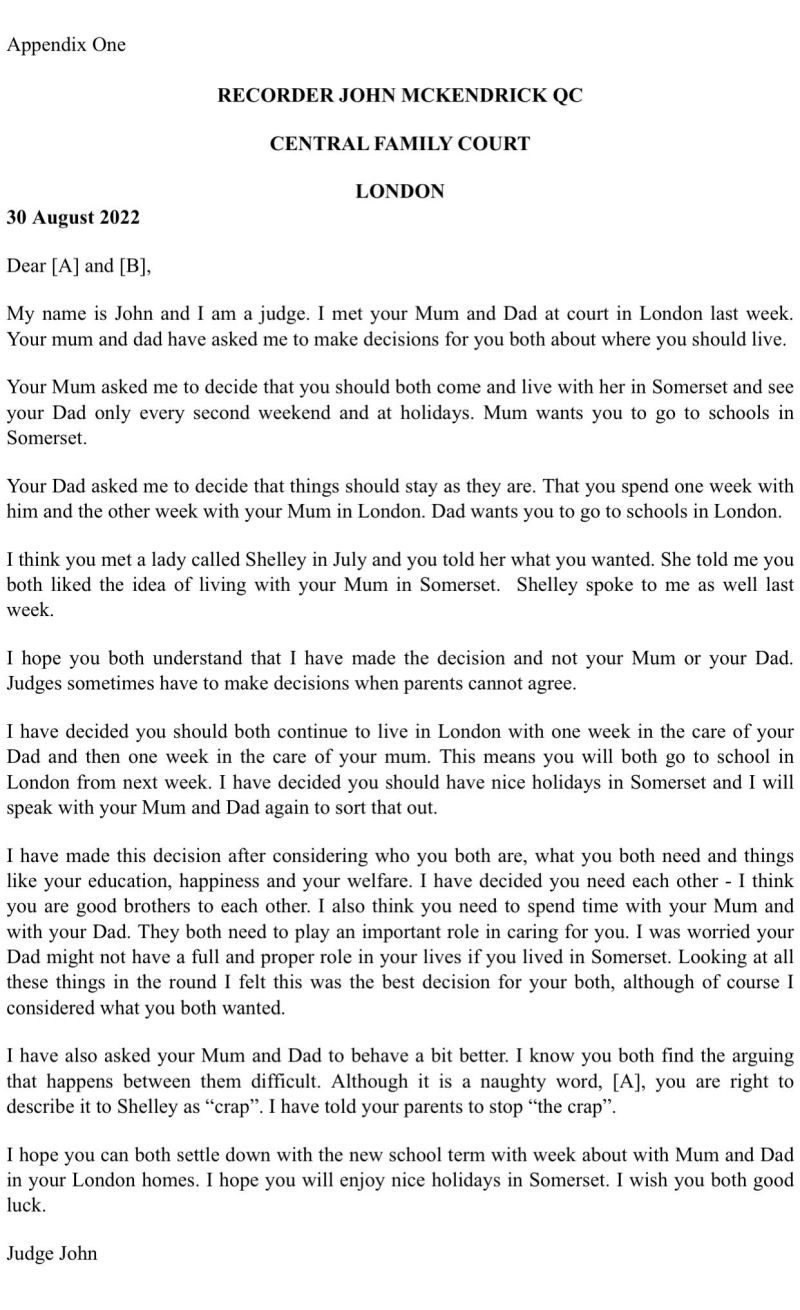 Judge John’s letter to the children went viral. The judge received many compliments for turning directly to the children to explain his decision, and for using clear language to indicate what the parents can do in the best interests of the children.

But the judge did even more in his efforts to act in the best interests of the children.

Since 2018 there was a Child Arrangement Order which provides for the boys (A and B) and their parents on alternate weeks and for shared time to be split between the school holidays. In 2021 the mother bought a home in Somerset, and lives in London and Somerset, despite the prohibited steps order that she should not relocate with the boys to Somerset made in 2018.

There has been repeated involvement of social services and the police in the lives of the boys. The judge however finds that the boys are doing well and do not appear to need this involvement. ‘The involvement of outside agencies has mostly been requested by one of the parents, seeking some form of tactical advantage or because of an over-reaction to issues with the 2018 Child Arrangements Order.’

This case has apparently received quite a bit of media attention. The newspapers wrote about the involvement of social workers and police. And the mother has started two on-line petitions. In the second one, she wrote about physical emotional and psychological abuse and she added a picture of the father.

The CAFCASS officer reported the boys found having three homes somewhat confusing and  that they would like some stability, which the mother did not seem to recognize. She reported: ‘It is my assessment that the Court should grant Ms [D] permission to relocate.’ She believed that the father should spend time with the children for half of each school holiday.

When questioned about A’s and B’s reported wishes and feelings the CAFCASS officer had concerns. For instance, she noted that A  appeared to think he had things he felt he should say, for example she said that he told her: “Another thing I don’t like about my dad”.  She told the court: “there has definitely been influencing on some areas for example around the negative feelings about A’s secondary school.”

The CAFCASS officer also made clear her recommendation is predicated on Ms D maintaining, supporting and actively prioritising A and B’s relationship with their father. The judge writes: ‘I was told if the mother cannot do so, then CAFCASS would not make the relocation recommendation.’ The mother pointed out that she can separate out the fact she thinks the father is a narcissist and a psychopath from their need to have a relationship with their father.

However, the judge believes limited credibility can be given to Ms D’s evidence that she can sustain and nurture the boys relationship with Mr D. ‘She has influenced the children and shared crime statistics,. It was questioned how can it be in child’s best interests to make a child feel nervous or scared of their own environment?  Ms D obtained  a final order in 2018 and in 2020 bought a family house 170 miles away. She had undermined and sabotaged HHJ Oliver’s order. She has set up a rival existence in Somerset which includes Sea Scouts, youth clubs and rugby clubs. This is contrary to A and B’s best interests before court had made a decision about relocation. She has put her own interests at the forefront to move to Somerset and the children are collatoral damage.‘ The judge believes the mother does not embrace what Mr D brings to enrich A and B’s life. ‘She found that very hard to even listen to it in court.’

It is against this background that the court must consider the welfare checklist for both options and to consider:

(a)the ascertainable wishes and feelings of the child concerned (considered in the light of his age and understanding);

(c)the likely effect on him of any change in his circumstances;

(d)his age, sex, background and any characteristics of his which the court considers relevant;

(e)any harm which he has suffered or is at risk of suffering;

(f)how capable each of his parents, and any other person in relation to whom the court considers the question to be relevant, is of meeting his needs;

(g)the range of powers available to the court under this Act in the proceedings in question.

The last hearing was on August 26 and the school term would start on September 5th. The judge wanted to make his decision before the start of the school term. Therefore he provided an embargoed draft judgment on August 30th. And he asked that his short letter to the boys will be given to the boys when they are in their father’s care on a short camping holiday. Given public criticism on previous welfare decisions in respect of the boys, he decided to provide a written judgment and to give permission for it to be published in anonymised form.

The judge explains to them why he has decided that they will continue to live in London, where the parents can co-parent. The mother’s request to move to Somerset was denied. He also writes: ‘I have asked your Mum and Dad to behave a bit better. I know you both find the arguing that happens between them difficult. Although it is a naughty word, (A), you are right to describe it to Shelley as ‘crap’. I have told your parents to stop ‘the crap’.‘

He has given his decision after these protracted proceedings, just before the next school year. He has indicated when and with which parent the brothers should be handed his letter. He did decide differently from what the CAFCASS officer had advised, but he weighed her statements well and used them for his decision. And he has been attentive to the many special circumstances and previous media coverage of these brothers.

Still, it is easy to imagine that many children in far less complex cases would also benefit from such a clear letter addressed to them personally.